Solstice: The Quest for the Staff of Demnos (NES) Playthrough 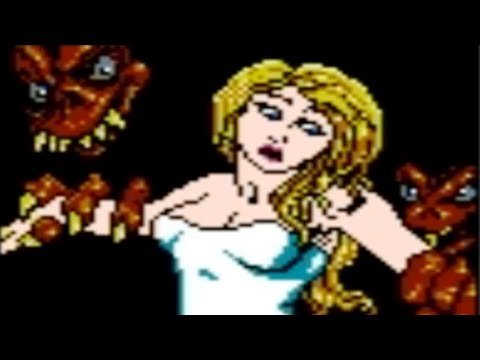 A playthrough of CSG Imagesoft’s isometric adventure-puzzle game for the NES, Solstice: The Quest for the Staff of Demnos.

Solstice is one of the more ambitious titles that we ever saw released on the NES, and I think a lot of people would argue that it largely fulfilled its ambitions. I know that it blew me away when it was new, and it still holds up amazingly well thanks to how well made it is.

An isometrically-viewed puzzle game with a heavy emphasis on platforming, Solstice was the type of game that you didn’t see often at all on game consoles. The genre had been built around the strengths and limitations of home computers of the era – the single-scene, graphically well detailed rooms, small characters, and laid-back pace required little in the way of fast animation or complex sprites – quite the opposite of your average NES game on shelves in 1990.

It was clear from the moment that you first turned it on that Solstice meant business. Within seconds, Tim Follin’s reknowned intro theme attacks you with such bombast that it’s nearly impossible to not sit slackjawed as you watch the looping demo.

The opening cutscene kicks off with Morbius, the evil bad guy, kidnapping the princess Eleanor so that he can sacrifice her to gain some sort of ultimate evil power. You, as Shadax, head to Morbius’s castle in search of the Staff of Demnos, the only weapon known to possess the power to defeat Morbius.

Unfortunately for Shadax, the staff has been broken into several pieces, and so Solstice tasks you with finding the pieces and reconstructing the staff in order to save the princess and save the world from whatever dark fate Morbius has planned.

The castle is huge – 256 rooms in total – and is loaded with all sorts of nasty stuff that can end Shadax in the blink of an eye. It is quite similar to The Legend of Zelda in how it leaves the player to explore, to experiment, and to make sense of how the elements all come together. It hands you nothing beyond the intro’s hints.

As you get your bearings, thankfully made easier by the inclusion of an auto-map, the game will begin to introduce the core pieces of its gameplay. Jumping platforms, stacking blocks, and using items to reveal hidden paths will all be quite familiar to you by the time you’ve reached the princess, but nothing is ever entirely straightforward. The puzzles mostly focus on how to get from one side of a room to the other, and once you start exploring beyond the initial few rooms, the difficulty level ramps up considerably.

Don’t be fooled into thinking that it is a short game given the length of this video. It took me a year or so as a kid to get through it, but the puzzles and room layouts never change, so thing become much easier with a bit of familiarity. Well, except for that final set of puzzles that vertically span three rooms – even once you figure that what you are meant to do, it is still extraordinarily hard to pull off the solution.

If you like games that make you think, Solstice is a top-pick for the NES. The graphics look fantastic and do a surprisingly good job at concealing the NES’s limited color palette. The perspective takes a bit of getting used to, and thanks to the complete lack of any shadows you’ll miss plenty of jumps starting out, but it does become fairly intuitive with some practice. The soundtrack is among the best on the NES – the intro themes are brilliant, and the dungeon tunes, more ambient and somber than you’d probably expect, set the tone well.

The puzzles can be devious, but the solutions are never so obtuse as to require a guide or a walkthrough. A bit of persistence will see you through. It’s not at all a casual game, though. It demands a keen sense of observation and some real dedication to reach the end.

I only wish that this style of game didn’t fall out of favor on game consoles. There were other good games like it – LandStalker on the Genesis and Monster Max on Game Boy comes to mind – but there really weren’t enough of these types made for how much potential the genre had.

Still, at least we got a couple more in this vein before they disappeared entirely. Solstice was followed up by a spiritual successor in the 1991 Game Boy title Altered Space (you can see my playthrough of that one here: ) and a true sequel in the 1993 SNES title Equinox. They’re both well worth checking out if you are a fan of Solstice.

If you are looking for slow-paced alternative to the manic action titles that the NES’s library tends to favor, I’d highly recommend checking out Solstice. It’s an experience that will stay with you long after you’ve put Morbius in the ground, saved the girl, and brought the world back from the brink of oblivion.
_
No cheats were used during the recording of this video.

NintendoComplete ( punches you in the face with in-depth reviews, screenshot archives, and music from classic 8-bit NES games!