protesters at Vikings game hanging from the stadium roof 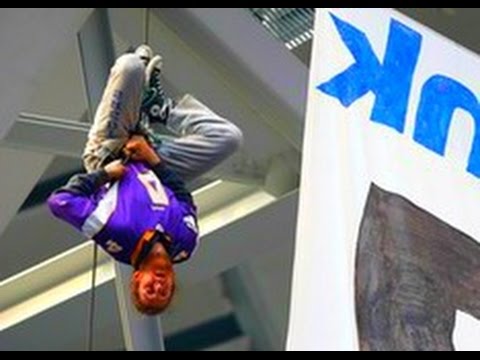 MINNEAPOLIS — Two protesters were charged with trespassing following the Minnesota Vikings-Chicago Bears game at U.S. Bank Stadium, after they unfurled a banner from the stadium’s rafters protesting U.S. Bank’s involvement with the Dakota Access Pipeline.

The fans, who had safety ropes and climbing gear, dangled from the rafters on the stadium’s east side throughout the Vikings’ 38-10 win.

Play was not interrupted, and Minneapolis police spokesman Corey Schmidt said a Hennepin County Medical Center doctor found both protesters to be medically sound after hanging from the rafters for most of the game. No one was harmed as a result of the incident, Schmidt said. Further charges are pending the results of an investigation.

The banner read “Divest #NoDAPL” with the U.S. Bank logo above, as the protesters were suspended in the air above Section 120 and one protester in a No. 4 Brett Favre Vikings jersey shimmied down the banner. Six rows of fans were cleared below the protesters.

Rescue workers used rappelling gear to navigate the truss above the stadium, where they eventually convinced protesters to climb down a ladder connected to the truss. Protestors told police negotiators they wanted the media present as they descended from the rafters. They were not made available to reporters.

The protesters climbed down to a round of boos from fans who remained in the stadium to see how the episode would play out.

Two protesters dropped a banner and lowered themselves down ropes from the rafters of U.S. Bank Stadium during the second quarter of Sunday’s Vikings game in a demonstration that continued into the fourth quarter.

Members of the media were sent a statement saying the action was a protest urging U.S. Bank (whose name is on the stadium) to withdraw a credit line from Energy Transfer Partners, the company that is responsible for the Dakota Access Pipeline. The project is an underground pipeline for oil that crosses through four states, but protesters argue that it could damage the environment and poison the water in neighboring areas.

Sen Holiday, who was identified as one of the two climbers, said: “We are here in solidarity with water protectors from Standing Rock to urge U.S. Bank to divest from the Dakota Access Pipeline.”

Said Karl Zimmerman, identified as the second climber: “This pipeline is dangerous for any community it passes through. It wasn’t safe for the residents of Bismarck, and it’s not safe for the Standing Rock Sioux.”

Play was not interrupted as the two, one wearing a No. 4 Brett Favre Vikings jersey, were suspended above section 120. Six rows of fans were cleared below the protesters.

FAN HANGS FROM ROOF DURING GAME AND HANGS SIGN