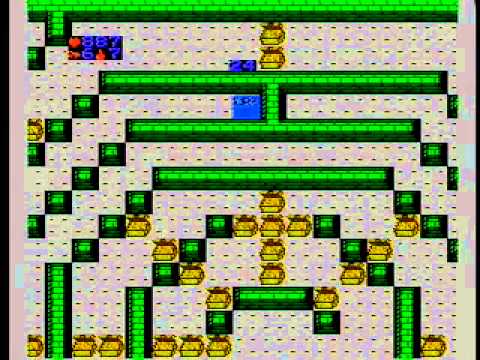 In preparation for AGDQ 2012 I recorded many runs through this game. I was picking it up again after several years of having not played the game at all. Re-watching my old run, i was fairly happy with the room order. The only things that needed improvement were slight changes in keys and bomb usage.

Health – The elf/archer is the fastest character, as well as the weakest. You might think that his weakness puts him at a disadvantage because he takes so much damage from enemies. Yet the mechanics of the game are such that the safest strategy is often simply to plow through all the enemies and get out of the room as fast as possible. The slower you go the more your health will decrease (as it runs down constantly on its own), the more enemies will spawn, and the more damage you’ll take as you pass by enemies. You get your health refilled every half dozen stages (give or take) so it’s mostly a matter of choosing strategies that budget the amount of health lost so that you’ll squeak by to the next refill point. It’s rarely worth it to go out of your way to pick up the oatmeal and cider health refills that aren’t directly on your path.

Keys – You need them to go through doors, obviously. However you can get a temporary upgrade to your weapon that allows you to shoot through doors, so i take advantage of this where possible. In general there are very few places where you need to go out of your way to grab a key. In a few places there are locked chests which are placed there just to annoy you and waste your keys, so these have to be avoided or accounted for. There are a few places where there are optional doors that i choose to open rather than attempting to tip-toe past them, wasting time and mostly likely opening them by accident anyway.

Bombs – Budgeting your bombs, knowing which rooms to use them in, and placing them precisely are the real art to speedrunning this game. Given the Elf’s weak constitution, It is not possible to get through many of the rooms without judicious bombs usage (or having TAS-like luck). The position of the screen affects which and how many enemies are destroyed. Typically the goal is to maximize the number of spawn points you destroy, and to clear out corridors that have an excessive number of enemies in them (or would have if you let the spawn points do their job). You can only carry 10 bombs max, so there are some places where there are more bombs available than i strictly need, so i use a few bombs simply to reduce lag by killing enemies. The most difficult part of bomb management is getting through the last few levels, where the amount of damage you take is staggering. Your bombs max out at 10 in room 79, so there is nothing you can do prior to this room in order to give yourself extra bombs for the end. In the rooms after 79, bomb usage and placement are critical, and the majority of runs (that didn’t end from bad exit-placement luck) ended during this stretch.

Room 93 contains two possible exits, one real one fake, and it is random which one will be the real exit. If I get good luck then the first exit i visit is the real one. If i get bad luck i need to visit the second exit, which requires using an extra bomb to avoid taking excessive damage from the ghosts. Since i was practicing the marathon route when i made this recording, i budgeted an extra bomb (by using a slightly slower strategy to save 1 bomb near the exit in room 86) for use in case i didn’t get the good exit in room 93. In this run I did get the good exit, which is part of the reason i kept it, so i had an extra bomb to burn off at the end of room 100.

Teleporters – Typically if you press the dpad in a given direction at just the right moment as you pass through, you can control where your character is placed on the other side. However if there are multiple possible destinations, you are not always able to control which destination is chosen. Sometimes you can manipulate it based on what you press on the dpad. Sometimes you can manipulate it based on your direction of entry. Sometimes it seems to be quasi-manipulatable (you can make it slightly more likely that you’ll end up where you want, but it’s not guaranteed, and honestly i’m not at all sure what factors are involved). And other times it’s just plain old random (e.g. World 4 treasure rooms).